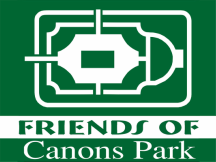 CORRUPTION, CANONS AND THE DUKE OF CHANDOS

Copyright 2010 Dr Aaron Graham, Lecturer in Early Modern Economic History at University College London.
As a resident of the Canons Park Estate it was entirely coincidental that his research led him to the activities of James Brydges, the first Duke of Chandos, who created the Canons Estate and built the original mansion on the site now occupied by North London Collegiate School. Here, he outlines how his research has led him to re-evaluate the methods used by the Duke to amass his fortune and how he concludes that perhaps he was not quite the shady character he has traditionally been made out to be!

At some point after 1720, James Brydges, the first Duke of Chandos, spent £1,630 ‘making the ground, with a large basin, two ponds, and planting’ in Canons Drive, and a further £275 on ‘two large stone pillars with supporters’. These still stand at the entrance to Canons Drive .This was a phenomenal sum (around £234,000 in modern money) and far more than the typical worker might ever hope to earn in a lifetime! All in all, the Duke’s personal fortune before losing much of it in the South Sea Bubble of 1721, may have amounted to as much as £712,000 (£102 million), making him one of the wealthiest men in the country.

Many have wondered at the sources of Chandos’ fortune, and concluded that it was probably derived from his office as Paymaster of the Forces Abroad between 1705 and 1713. During this period, Britain and her allies – led by the Duke of Marlborough – had deployed armies across Europe to oppose King Louis XIV of France in the War of the Spanish Succession. Chandos handled the money for them all. Every penny for the allied armies went through his hands, some £23.8 million (£3.4 billion) over his eight years there. Unsurprisingly, the office was a byword for corruption, and for a long time the suspicion was that Chandos had similarly enriched himself at the country’s expense, and used this to fund his extravagant spending at Canons, the magnificent mansion and grounds that he created between 1712 and 1720, employing the top craftsmen and garden designers of his day.

Since the 1950s, more extensive research into Chandos’ papers – now held at the Huntington Library in California – have shown the techniques he used. Perhaps the most harmless was to engage in what would be today called insider trading. Taking advantage of his close official links to the Duke of Marlborough, Chandos was informed early on of their plans for military campaigns abroad. His particular contact was Major-General William Cadogan, a fellow old boy of Westminster School and Marlborough’s chief of staff. Using this information, Chandos would place bets on the London markets that certain towns would fall by certain dates; for instance, by June 1706 he had £3,500 (£503,000) invested, and stood to lose £1,200 (£173,000) if the town of Charleroi fell after July. In this case it did not, but it is clear that Chandos occasionally profited, and his winnings no doubt contributed towards the growth of his fortune.

Another scheme hatched by Chandos and Cadogan was to exploit fluctuations in exchange rates. Not just individual currencies but the relative values of gold, silver and paper coinage across Europe, which could vary wildly. Chandos possessed a large amount of control over his operations and the remittance of money, and it was therefore relatively easy for him to channel funds to his agent in Antwerp. There, he could buy Flemish gold currency cheaply and ship it to Amsterdam where it was worth more.

Cadogan assisted by convincing the troops to accept this foreign gold coin, and by introducing Chandos’ agent to a merchant who could supply large quantities of it. In 1707 alone, Chandos made over £2,000 (£288,000) and Cadogan even more.

However, perhaps the most damaging accusation against Chandos was that he made his money through corruption, by skimming a percentage off all the monies that he handled, and then blackmailing the troops into silence. One historian has estimated that Brydges took a three percent rake-off from all the money that he handled, as well as lending out public money for private interest while it sat unused in his hands. Chandos has therefore been accused of milking the state for all it was worth, damaging its capacity to wage war at a time when the Duke of Marlborough needed every penny he could get to carry on the fight against Louis XIV.

Discoveries Turn Accusations on Their Head

Having spent time researching at the Huntington Library in California and reading much of Chandos’ correspondence, I have made some discoveries that have turned these accusations on their head. It is true that Chandos was accepting large percentages from the money he handled but the context in which he was operating needs to be taken into account. The remittance of money was a slow business, mainly because it had to be drawn as foreign currency on overseas banks through cumbersome instruments called ‘bills of exchange’.

In modern terms, Chandos was running the entire war effort out of his current account, remitting money abroad by banking cheques in Amsterdam or Lisbon that might take up to two months to clear. As a result, there was a dangerous risk that Marlborough’s army would run short of pay in Flanders and might mutiny, even if the money was technically available and in the system.

Guarantees Using His Own Money

Chandos appears to have approached the troops abroad with an offer they couldn’t refuse. In return for a percentage, he was prepared to guarantee that the regiments would receive their pay on time - using his own money if necessary to make up the difference - until he finally received the real money from the Treasury. That percentage covered the risks he ran, the costs of borrowing money from his bankers in London and abroad, and a fee for the tricky financial footwork that all this involved.

Although it may be an exaggeration to say that Chandos single-handedly won the war for Britain, there can be no doubt that he played an important part. It is true that he exploited his position to make money on the side, but in the big picture these sins were relatively minor: what was £2,000, after all, when millions were being spent on the war each year? Moreover, far from damaging the war effort, by injecting liquidity into the financial system at his own personal risk he helped keep Marlborough’s armies afloat. What he did was technically corrupt, but also necessary for national survival.

Sadly, the original Canons Mansion was dismantled and many of its outstanding features and treasures were sold off and scattered throughout Britain. The lands, trees and lakes of the Canons Park Estate, Canons Park and the grounds of North London Collegiate are all that remain to remind us of the glory days of the Duke of Chandos – and how his greed and corruption, though reprehensible, may have helped Britain to defeat its enemies.